That Friday, we decided to start earlier than usually, because weather forecast wasn’t very optimistic. There was a bad prediction, that after 9pm will be very cloudy. Clouds and bad weather is our worst enemy, if you work as an aurora hunter, because when the sky is clear, you will see for sure some northern lights. Of course, you need also some help, which means it has to be also a solar wind, which actually makes northern lights, but almost everyday there is some activity, better or worse… Unfortunately, that Friday (and it wasn’t the Friday 13th…) solar wind supposed to be also very weak. We started our trip a few minutes after 4pm, it was the only chance to see anything before 9pm.

Our destination was Tromvik, a little village approximately 50km north-west from Tromso. On the road to Tromvik, there is a few beautiful spots with the view on the fjord, dark enough to see great northern lights. Hopefully sky was totally clear, that we could see stars, so on the coast just by the water, we made a small ca small camp with bonfire, hot drinks and snacks for our guests. Everything was going perfect, except northern lights… Nothing, nothing, nothing.. Especially when are you going to Tromso for just one night (which we totally not recommend, even one week is not enough to do everything what Tromso offers) you are expecting great lights, because probably it’s yours once in a lifetime trip. We truly understand that and we are doing our best to show you the greatest spots with aurora, but sometimes solar wind don’t want to help us. I checked also app on my phone, but it said in next 45min there is just 5% of chance to see northern lights and KP maximum 0,67. Hopefully on the sky there was a little bit of green lights looks like a green rainbow, it’s always a good sign! But still nothing more that this, it’s not what tourists want to see every and then, after 2 hours of waiting show already started. 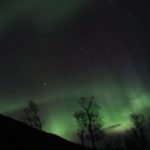 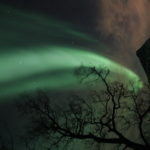 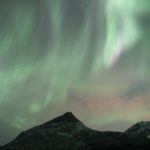 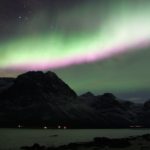 Firstly it was just bright green dancing on the sky, typical green aurora. Our guests were satisfied, but then suddenly aurora was going stronger and stronger, quick look on the app, it said maximum should be 2 KP this night, but our aurora was actually much stronger than this 2 KP. For a couple of minutes sky turned into spectacular show, everything around was so bright. Whole sky was burning with green, orange and pink lights, something incredible! We didn’t expect that, even prediction was totally wrong, so just a small tip for the future: of course forecast and every app on the phone can be helpful, but don’t trust them 100%, because sometimes you can miss so spectacular show like on Friday, where app said it will be maximum 2KP, but real KP was around, which is really high. We can show you a few pictures, but any photo, even taken by the best and the most professional camera, can’t show you how aurora looks like. You have to be here and see it on your own eyes to believe and then you will understand, why 1 night in Tromso is not enough! 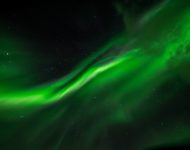 Nature has its persistent cycle 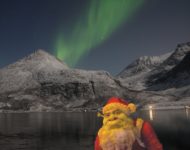 What to wear during Aurora Hunting? 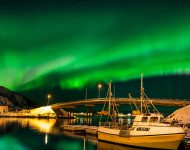 Actually, what is this “aurora hunting”?

Sorry. No data so far.

Please be advised that our online store uses cookies technology and at the same time does not automatically collect any information, except for the information contained in these files (so-called "cookies"). If you disagree, change your browser settings. Learn more. Be sure to also read the information clause on the processing of personal data.